The return of GuanYin Maitreya

The Princess Warrior of the Holy SWORD was BORN from the HEAD of Almighty Creator, She has many eyes and hands. The Ashtar Command Spaceship showed her appearance under the clear sky where SUN & MOON SHINES together with a Trinity of GuanYin, Athena and Mary.

The Holy Trinity Goddess slowly turned into Maitreya Buddah sitting down on LOTUS and show a small Child in HER RIGHT HAND, and A GRAIL on HER LEFT HAND. 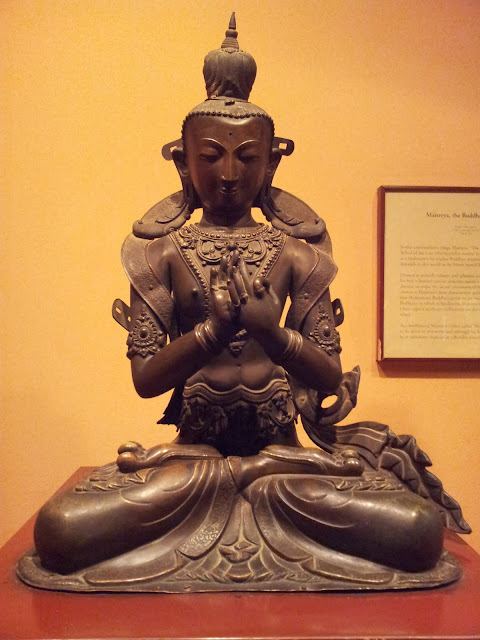 
She OPENED UP GREEN BOX, and it had ELPIS with Green, Blue, Red and Yellow colors.

Maitreya Buddah said, I am Metatron, I am Maitreya, I am the 5th Angel, I am the 5th Buddah, I am LOVE, I am TIME, I am GAIA, I am ONE, I am ALL. NOW I am showing you my Inner Child for you to reach YOUR ETERNITY. My PHYSICAL Body will show you the day. I always show the same image in all my reincarnations. Look for the FIVE Colored ROCK I used to Seal the SKY.

Goddess Codex of Ascension is just simply on this PLANET for All Galaxies, All Timelines and All Universes. You just need to watch the sign.


The name Maitreya means "Compassionate One" and designates the Votaries of the Lotus Sutra.

"Buddha says Maitreya under the birth of the Sutra": When the Maitreya Bodhisattva. It’s not too old to observe parents in the sky. When you descend, you should be born from the right. As I am today, the right threat is no different. Maitreya Bodhisattva is also the same. Take the time to sing the orders of the heavens. Maitreya Buddha has descended to life. It is time to repair the Fanmo and the Zi Li Zi. Famous Maitreya. Maitreya Buddha has thirty-two and eighty good. Solemn in its golden color.

According to legend, in October 1994, the then aunt of the whole mountain, Mr. Shi Miaoshan, saw the GuanYin Bodhisattva, and his body was tall and stood by the sea, glittering. He was grateful to the instructions of the Bodhisattva, and his heart was able to create a statue of GuanYin in the same position as the standing position, that is, the Nanhai GuanYin image in the future. At the opening ceremony, when the presiding abbot Shimiaoshan said "the beginning of the ceremony", the clouds on the head of the GuanYin image suddenly opened, casting a golden light, and the air showed a clear GuanYin statue. This Ruixiang was smashed by the number of 5,000 people present, and there was video information. The GuanYin Bodhisattva was rumored to be a good story.

Description of the video in English:

In 1997, I witnessed the strange phenomenon of gratitude and personal experience. This report is absolutely true and shocking!!

Located about 100 nautical miles east of the Hangzhou Bay exit, the island covers an area of only 12.5 square kilometers (including a land area of 11.85 square kilometers, and the rest is intertidal zone). The highest point is Foding Mountain, which is about 300 meters above sea level. The island is located in Putuoshan Town, Zhoushan City, and has the Putuoshan Administration directly under the Zhoushan Municipal Government. It is the only Buddhist resort in the four famous Buddhist mountains in China, and has the reputation of “Haitian Buddhism”.

Original description of the video in Chinese:

The Seven Buddhas of Antiquity and the Future coming of Maitreya


Maitreya will be the fifth and future Buddha of the bhadrakalpa, and his arrival will occur after the teachings of Gautama Buddha are no longer practiced.

The coming of Maitreya will be characterized by a number of physical events. The oceans are predicted to decrease in size, allowing Maitreya to traverse them freely. Maitreya will then reintroduce true dharma to the world.

His arrival will signify the end of the middle time, the time between the fourth Buddha, Gautama Buddha, and the fifth Buddha, Maitreya, which is viewed as a low point of human existence. According to the Cakkavatti Sutta: The Wheel-turning Emperor, Digha Nikaya 26 of the Sutta Pitaka of the Pāli Canon), Maitreya Buddha will be born in a time when humans will live to an age of eighty thousand years, in the city of Ketumatī (present Varanasi), whose king will be the Cakkavattī Sankha. Sankha will live in the palace where once dwelt King Mahāpanadā, but later he will give the palace away and will himself become a follower of Maitreya Buddha.

The scriptures say that Maitreya will attain bodhi in seven days (which is the minimum period), by virtue of his many lives of preparation for buddhahood similar to those reported in the Jataka tales.

Sumedha, the youth who would after many reincarnations become Gautama Buddha, receiving his niyatha vivarana (prediction of future Buddhahood) from Dīpankara Buddha.

The Arya Maitreya Mandala, founded by Anagarika Govinda is based on the idea of the future coming of Maitreya.

Pali sources say that beings in Maitreya's time will be much bigger than during the time of Sakyamuni. In one prophecy his disciples are contemptuous of Mahakasyapa, whose head is no larger than an insect to them. Buddhas robe barely covers two fingers making them wonder how tiny Buddha was. Mahākāśyapa is said to be small enough in comparison to cremate in the palm of Maitreya's hand.

Victory of the Light!


Editor Note: This article has translations from Chinese texts but they could be improved. If you feel that you can help us, please contact Ukeron through ukeron.white@gmail.com or ukeron@tuta.io.